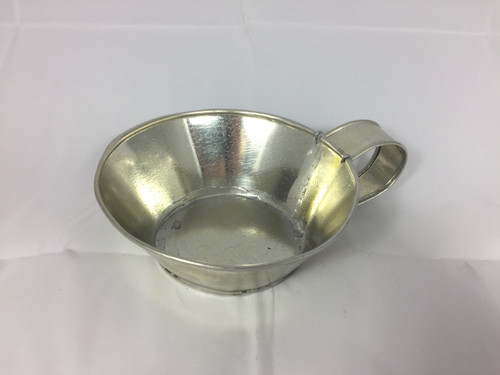 The Steamer Bertrand sank in the Missouri River on April 1, 1865.  The boat was enroute to Virginia City, Montana, when it hit a snag and sank near Omaha, NB.  The steamer was loaded with tons of good destined for the mercantile stores and settlers' homes in Virginia City and the surrounding area.  The U.S. Fish and Wildlife Service excavated the boat in the late 1960s, early 1970s and much of the cargo was preserved and is on display in a museum at the Desoto National Wildlife Refuge in Nebraska.

Our reproduction is taken from a cup that was recovered from the Bertrand cargo.  Our repro is made from hot dipped in.  See pictures of both the reproduction and the original cup.  Made in USA.