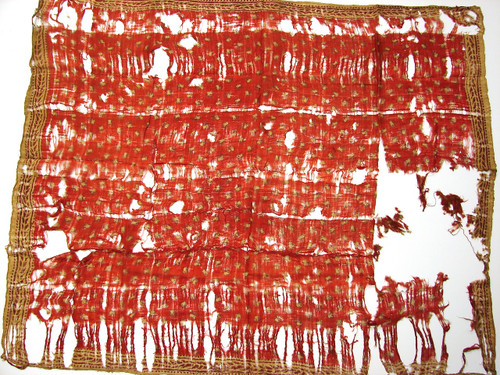 This handkerchief is so much of a piece of Civil War history that its presence will bring the smell of gunpowder and woodsmoke....During the battle of Gettysburg, William Kean, of 1st Company, Richmond Howitzers, gave his handkerchief to Pvt. William Pritchard Smith after Smith received a severe leg wound. The handkerchief was then used as a tourniquet to arrest the flow of blood from Smith’s leg. Smith was subsequently captured and imprisoned, but kept the handkerchief and it was later donated to the Museum of the Confederacy, where it is now housed. Our reproduction is a faithful replica of this handkerchief, made of 100% cotton and measures 24x20. See the description below of the 1st Company, Richmond Howitzer’s actions during the battle:

"on July 1 they were encamped within a few miles of Gettysburg. The battery moved up with the division on the 2nd, and the rifle section commenced firing about 4:00 p.m., with the Napoleon section in reserve nearby. Two hundred rounds were fired, and both sections were exposed to the heaviest artillery fire they had ever experienced. Seven men were wounded, and the battery lost thirteen horses. The battery went into position on the morning of the 3rd, about 350 yards in advance of the skirmishers; and, firing twenty rounds succeeded in driving back a Federal advance. At 1:30 p.m. the battery, which had moved to another location, opened up in the general artillery fire preceeding Pickett’s assault. Both sections of the battery were engaged during the day. One of the rifles was disabled when a wheel was shot away, and a caisson had to be abandoned when its team was killed. The company lost two men killed and two wounded. Ten horses were killed on the 3rd. During July 2 and 3 the rifle section fired about 600 rounds, and the two Napoleons expended 264 rounds."

Also, numerous references to William "Billy" Kean can be found in Robert Stiles Four Years with Marse Robert.   Stiles was a messmate of Kean's before his promotion and mentions him frequently in his memoirs.