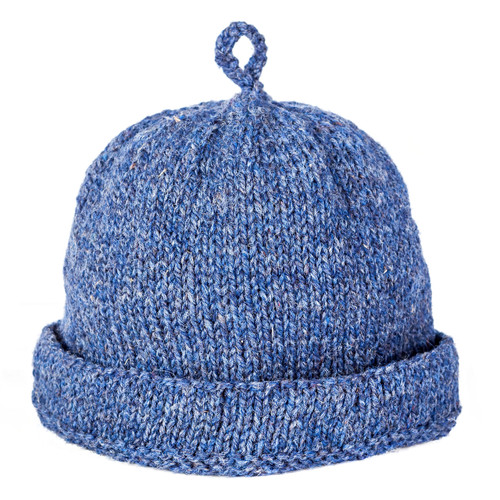 The Monmouth cap was fashionable between the 15th and 18th centuries, and is associated with the town of Monmouth in Wales.  The hand knitted round caps were popular with both soldiers and civilians.  The earliest surviving reference to a "Monmouth cappe" dates from approximately 1576.  There is even a reference to such "Monmouth Cap" in Shakespeare's Henry V, which was written around 1599.  After the settling of North America, the  Massachussetts Bay Company ordered Monmouth caps for the settlers in the colony.  As time went on, the caps manufactured in cottage industries outside of Monmouth, and the term "Monmouth cap" became a generic one.  Our reproduction is made from 100% wool yarn, faithfully reproduced from patterns drawn from original specimens (pictured).    The yarns used in our socks come from a North American mills that has been in business since 1857.  The wool is spun and dyed in this mill before going to our knitters to be made into our knit products.  These socks are they are advertised as; completely hand knit from North American yarns by individual North American craftspeople who receive a fair wage for their labor and skill.  We have been in partnership with these craftspeople for quite some time and are honored to support a guild that honors and preserves such "old world" skills and traditions.