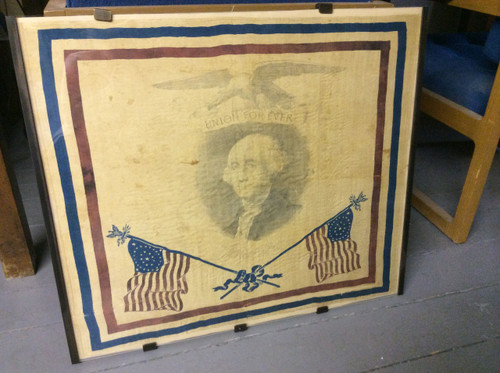 With a battle looming and the countryside in turmoil, the Union cavalry rode into Gettysburg on the afternoon of June 30, 1863.  The troopers dismounted and lounged in the town while awaiting further orders.  During that time, the seven year old daughter of innkeeper Israel Yount, Emma, was playing outside their home when a cavalryman asked her to come and visit with him while he was resting.  The cavalryman told her that he missed his young daughter at home and asked if little Emma would hug and kiss him on the cheek to remind him of his daughter, who he felt he might not ever see again.  Emma asked her mother if she could do as the cavalryman suggested, and her mother considered the circumstances and allowed Emma to do so.  Before leaving, the cavalryman gave young Emma a silk handkerchief he was carrying that featured George Washington's image and patriotic border and flags.  Emma kept that handkerchief until her death in 1946 and it was then donated to the Adams County Historical Society.  Our reproduction is done in cooperation with the Adams County Historical Society and a portion of the proceeds of its sale will be returned to them.  This handkerchief has also been on display recently at the Gettsyburg National Battlefield museum.  Our reproduction is faithful to the original in every detail, and has been approved as authentic by museum staff.