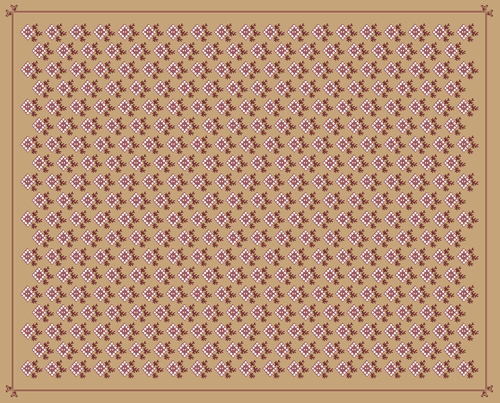 The Steamer Bertrand was loaded with goods, bound for Virginia City, Montana, struck a snag and sank in the Missouri River on April 1, 1865.  This steamer was heavily laden with goods bound for the Montana mining fields and settlements, and in 1968 the Bertrand began to be salvaged.  Similar to the Arabia, many of the goods on board the Bertrand were preserved in the cool mud and silt deposited by over 100 years of river flow.  Part of the goods discovered were several bulk examples of printed cloth, which was headed to the shelves of stores in Virginia City.  The cloth narrow in width and was believed by some museum experts to have originally been handkerchiefs, or bulk cloth goods to be made into garments. We have been fortunate to have details of these specimens and will be offering them as cotton goods handkerchiefs.  This first example is 31 x 25 inches and is 100% cotton.