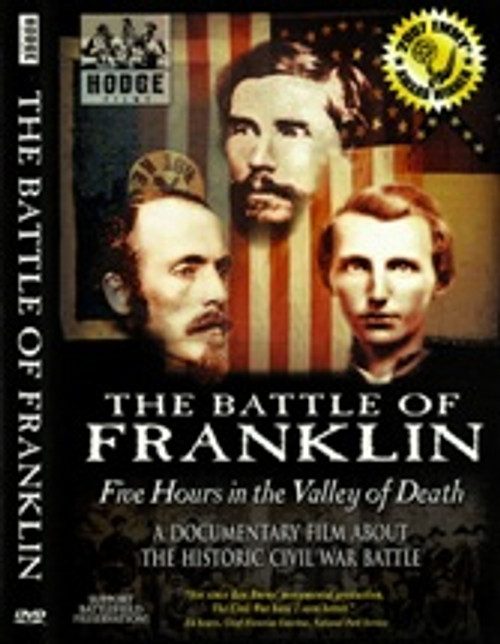 We are very excited to be offering the documentary/reenactment films by our friend Rob Hodge!

The Battle of Franklin: Five Hours in the Valley of Death, 70 mins

Battle of Franklin: Five Hours in the Valley of Death depicts Confederate General John Bell Hood’s fateful attempt to gain control of Tennessee from Federal forces in one of the Civil War’s fiercest battles. As cannons and muskets roar, this film presents the decisive conflict of the 1864 Battle of Franklin, told through the actual thoughts and words of the soldiers who experienced this ferocious and bloody struggle.

Partially filmed on the original battlefield in stunning high-definition, Battle of Franklin is the recipient of a 2007 Emmy® award and a 2007 Telly Award. The film has been aired on Nashville Public Television.

“Combining excellent cinematography, graphics, maps, and stirring narration, The Battle of Franklin chronicles one of the bloodiest battle of the Civil War (little-known to most, but comparable to Gettysburg in strategic importance). Painstakingly recreating the events leading up to November 30, 1864, when Franklin, Tennessee, witnessed the last large gathering of Confederate forces facing Union soldiers in a fierce battle, the film details the military tactics of both the North and the South, focusing on the lack of competent Confederate leadership (in fact, by battle’s end, the fate of the South was pretty much sealed).. .., this outstanding program features portions of letters from foot soldiers read aloud, high-resolution pictures of primary military leaders, and excellent re-enactment footage shot on location in Franklin. DVD extras include a battlefield preservation tour and an interview with historian Thomas Cartwright.
Highly recommended. Editor’s Choice.”

“Franklin: Five Hours in the Valley of Death is a tour de force! One of the best—if not the best—documentaries I have seen on a Civil War battle; not Since Ken Burns’ monumental production, The Civil War, have I seen better. This film melds the scenes from re-enactments, the ‘voices’ of long dead participants, contemporary photographs, the sounds of battle, and period music to tell the horrific story of five hours in the valley of death. [This film] has beautifully illustrated the need to preserve what is left of the Franklin battlefield, where Americans of so many years ago stood tall for what they believed in.”
— Ed Bearss,
Chief Historian Emeritus
National Park Service
featured on Ken Burns’ The Civil War

“This Emmy award-winning DVD truly does justice to its title of “The Valley of Death.” The scenes depicted herein are as close as anyone will ever wish to be to the vortex of hell that was the Battle of Franklin, Tennessee, November 30, 1864. The frontal assaults, graphic hand-to-hand fighting, and the horrors and carnage throughout that terrible night are almost too much for the eye to behold.”
— Thomas Y. Cartwright
Acclaimed Franklin Historian

“It’s just great cinematography… The film very much captures the emotion that I would envision was felt at the Battle of Franklin.”
— Robert Hicks
author of Widow of the South

“Brilliant… The reenacting is unparalleled; [it’s the] best Civil War combat impression ever on screen.”
— Tony Horwitz
Pulitzer Prize-winning writer,
and author of Confederates in the Attic