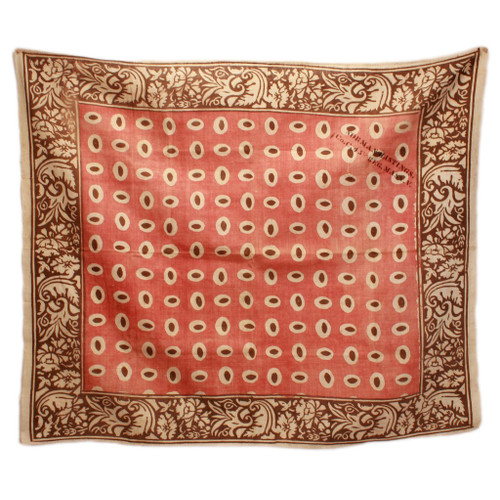 The most recent of our handkerchief offerings, the Norman Hastings Handkerchief is a true and faithful copy of the original, in my personal collection, that was carried by Hastings while serving with Company C of the 45th Massachusetts Infantry.  The handkerchief is made of cotton and measures 26 x 22 inches.  The reproduction does not feature the name stencil as the original featured.

Private Norman Hastings of Franklin, Massachusetts was a 29-yeard-old married farmer from Franklin, MA when he volunteered for service in the 45th Regiment of Massachusetts Volunteer Infantry. The 45th was a 9-month regiment organized, fitted out, and brought to strength at Camp Meigs in Readville, MA. Hastings enlisted on September 15, 1862 in Company C. On November 5, his regiment departed from Boston on the steam “Mississippi” headed for Morehead City, North Carolina, to reinforce the Union occupation of North Carolina.

Over the course of his tour of duty in the South, his regiment engaged the enemy on several occasions and suffered casualties. On June 24, 1863 the 45th Regiment embarked home for Boston on the steamer “S.R. Spaulding”. Hastings died at sea on June 27 from disease, likely dysentery. He probably contracted the illness in the swamps of North Carolina as a result of poor sanitary conditions, and a soldier’s irregular nutrition and the limited medical treatment available to him surely worsened his condition.

Over its nine-month term of service, the 45th lost 19 enlisted men who were killed or mortally wounded in battle, but 32 who died of disease. Hastings was three days from setting foot on his home state soil when he died. He was thirty years old. Norman Hastings is buried in Bellingham, MA.

The original handkerchief, stenciled with Hastings' name and regiment, was among Hasting’s belongings which were returned to relatives after his death. It is now in the collection of South Union Mills.