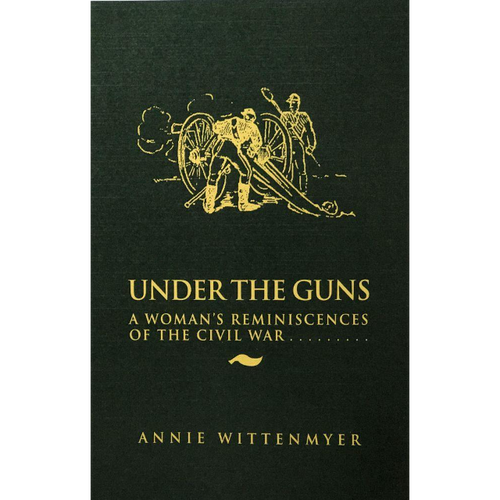 Under the Guns - A Woman's Reminiscences of the Civil War is the personal memoir of Mrs. Sarah "Annie" Wittenmyer (1827-1900) of Keokuk, Iowa.  She spent her time during the Civil War ministering to the sick and wounded soldiers, on the battle-fields and in the hospitals in the western theater (Shiloh, Vicksburg, etc.).  She started procedures in the hospitals (1863) that are still used in our hospitals today.  She was also instrumental in starting, with the help of the United States Christian Commission, the first dietary kitchens in the hospitals.

"The author of this most interesting and historic volume, Mrs. Annie Wittenmyer, I very often met whilst on my frequent visits to the headquarters of my husband, General Ulysses S. Grant.  Mrs. Wittenmyer was ever deeply interested in her efforts to relieve suffering; ever appealing for the discharge of the brave men who were made helpless by their wounds; ever braving dangers and enduring hardships in the performance of her self-assumed, patriotic heart duties." - JULIA DENT GRANT - Nov. 27, 1894

In her ministering to the sick and wounded, she smelled the stench of festered wounds, heard the shrieks of the dying, trudged through battle-field gore, dived into mud to escape bullets, and shared the discomfort of being on the front-line of battle.  Her train was once attacked by guerillas, and she'd entered pest houses and malarial districts.  She prayed with the suffering and dying and was ready to point the lost soul to the Saviour.

This book is paperback, 200 pages.

The Homeplace 1850 History and Receipt Book

Union, Constitution & Must and Shall Be Upheld Handkerchief