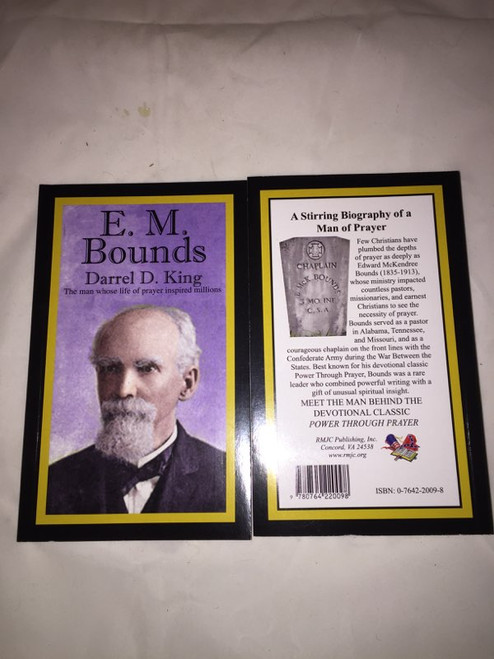 Edward McKendree Bounds was born August 15, 1835 in Shelbyville, Missouri.  He grew up with five brothers and sisters. With word spreading of a rich gold strike in California, Edward and his brother Charles left Missouri to strike it rich in the gold fields of California.  The filth of the camp reminded both Edward and Charles that "the love of money is the root of all evil."  After four years with little success they decided to go home to Missouri.

In 1854 Edward parted St. Louis and his brother Charles to go to Hannibal, Missouri to study to become a lawyer.  At the age of 19 he became the state's youngest lawyer but he was not happy.  In 1857-58 a great Spiritual Awakening was taking the country by storm.  Edward sat in his office in Hannibal and pondered the goings on and the condition of his own soul.

On November 14, 1862, a list was composed of 250 men who were to be apprehended and given the opportunity to pledge an Oath of Allegiance to the Union.  These men were also required to post a $500.00 bond.  Rev. Bounds was on this list.  The reason, his church had the word "south" in its name.  Bounds was arrested along with 249 others, placed in an open cage on a cargo steamer, in the dead of winter with no extra clothing or provisions were then transported to Jefferson City, Missouri.  They were then imprisoned in St. Louis and after a year Bounds was exiled from his home state.  He walked to Arkansas to join the 3rd Missouri and General Sterling Price's army and was involved in the roughest of the campaigns with the Missouri Brigade, including Franklin, TN, where he was wounded... purchase to read the end of the story

This powerful little book (4 3/8" wide x 7" tall) is an inspiration and an example of how God can use a man who is dedicated to Him and prayer.  This paperback has 160 pages.

Confederate Style Shirt with Pockets - all visible stitching by hand